This is a huge victory for the Warehouse Employees, who overwhelmingly voted yes to join Teamsters Union Local 690!  Business Representative Larry Kroetch, who also represents the Sysco Drivers, worked many long hours and on holidays educating the employees and answering questions to help them make an informed decision on whether or not to have Teamsters Local 690 represent them and negotiate a fair contract for wages, benefits and job security. International Organizer Chris Rosell accepted the challenge to assist the Local in this effort and both his and Larry’s hard work paid off!

Teamsters Local 690 members from multiple employers and industries came out to show their support of the Sysco employees for their NLRB Election yesterday.

SOLIDARITY WITH SYSCO EMPLOYEES IN SPOKANE WHO WANT A UNION 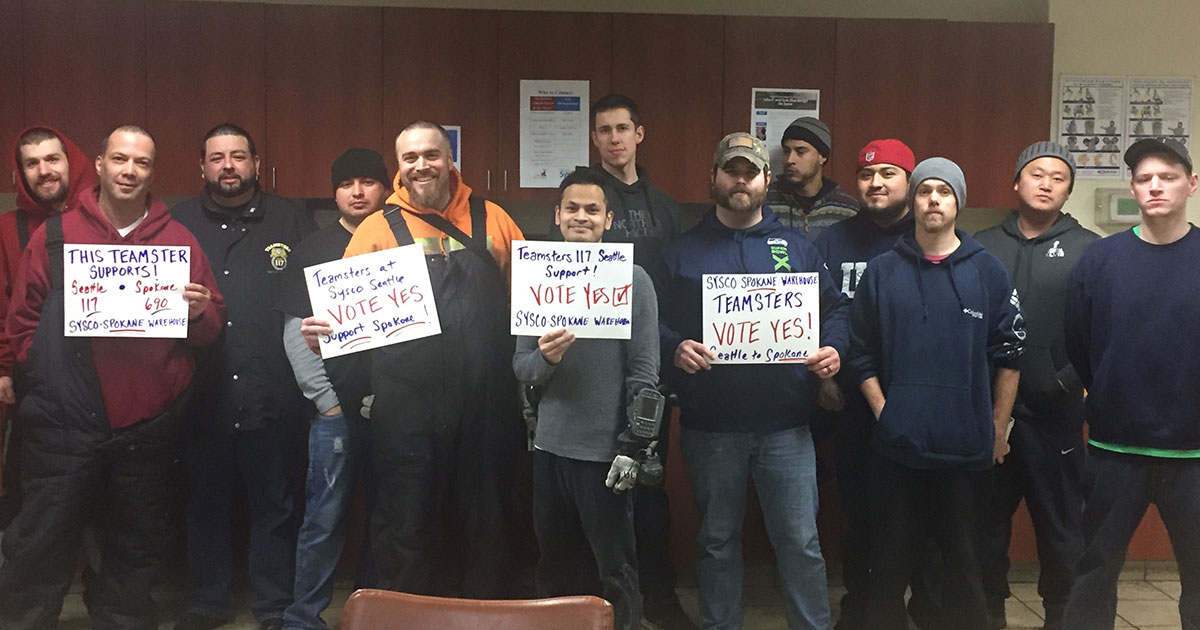 Members of Teamsters 117 who work in the food service industry are sending messages of solidarity to their Brothers and Sisters who work at the Sysco warehouse in Spokane.

The Spokane warehouse group is fighting to win their Union and become members of Teamsters Local 690. A National Labor Relations Board (NLRB) election is scheduled for this Thursday, March 2.

“I STAND WITH MY BROTHERS AND SISTERS IN SPOKANE TO HAVE A VOICE AT WORK.”

Last night, dozens of our members at Food Services of America and the Sysco in Kent shared photos with signs that read, “This Teamster stands with the Spokane Sysco warehouse” and “Vote YES!” Many offered words of encouragement:

“I have been at the bargaining table and have seen first-hand what this Company has proposed and would implement if we were not Union here in Seattle,” said James Borsum, a Teamster 117 member who works for Sysco in Seattle. “I stand with my Brothers and Sisters in Spokane to have a voice at work.”

Yesterday, Sysco sent a letter to their employees’ homes trying to convince them to vote against the Union.

“These kinds of tactics are typically used to try to intimidate employees and frighten family members,” said John Scearcy, Secretary-Treasurer of Teamsters Local 117. “Sysco should refrain from this kind of ugly campaigning, respect the democratic process and their employees.”

Check out more solidarity with Spokane photos on our Facebook page here.

There are no upcoming events.

Back to Top
MENU